Hyperlinks in reports below are to Real Audio files... you can download the latest version of Real Audio Player for free at  www.real.com ... more clips to add later

All contacts are on CW unless otherwise stated.

Here's some screen shots of our QSO:

Our common window possibilities are quite limited due to obstructions at both ends. Rex had to "shoot" between the trees to make our QSO, despite this he still reached -18dB best with me and we were exchanging "free text" messages and agreed to try CW for the last 10 minutes of our window. Unfortunately, we did not succeed this time, but I'm confident that success on CW is not far away.

Here's an example of Rex's window to Eu showing the Moon position on a previous attempt: 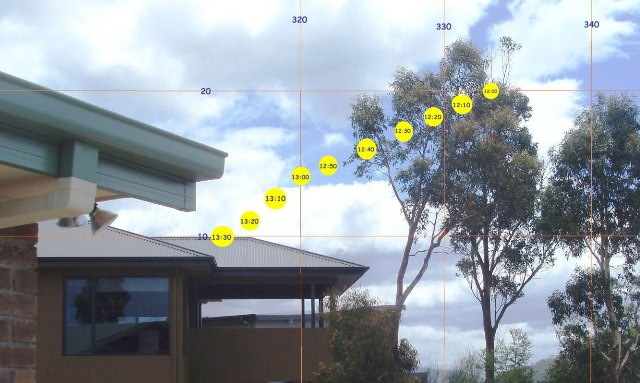 After working VK7MO, I left the shack without realising that WSJT was still set to “Auto TX ON”… I was using WSJT to send CW to Rex, as agreed. WSJT carried on sending the last message I sent to Rex every two minutes... could have gone on for hours! Fortunately, I heard Trevor calling when I went outside to hang some washing out!

Back to News of my latest EME Activity